Barcelona-El Prat Josep Tarradellas Airport, or simply Barcelona-El Prat Airport, is located 12 km (7.5 mi) southwest of the Barcelona 6 metres above sea level, between the municipalities of El Prat de Llobregat, Viladecans and Sant Boi. It is only 3 kilometres from the Port of Barcelona and 7 kilometres from the Zona Franca Industrial Estate, one of Spain's most important industrial and logistics parks and a key factor in Barcelona's economic strength.

The airport has had several popular nicknames such as La Volatería, so named for occupying the land of the first airfield in El Prat del Llobregat (1916, Aerodromo de La Volatería); Aeropuerto del Prat, or the most common of all, Barcelona-El Prat Airport, as it was designated in its penultimate official change in 2011. This designation was in force until 1 March 2019, when the new name of Josep Tarradellas Barcelona-El Prat Airport was made public, as a tribute to the former president of the Generalitat de Catalunya, from whom it takes its name.

Barcelona-El Prat is the second largest airport in Spain, after Adolfo Suárez Madrid-Barajas, and is the main airport in Catalonia and on the Mediterranean coast. In 2019, 52.7 million passengers passed through its facilities, placing it in 6th position on the list of Europe's busiest airports. That same year, its growth increased by 5% compared to 2018, with more than 344,000 operations carried out and more than 177 million tons of cargo transported.

The policy of new routes practiced by the airport Management encouraged the opening of Barcelona to other destinations. Currently, there are 371 air routes that depart from the Catalan capital, with flights to 212 destinations in 62 countries around the world. This figure means that international traffic accounts for 73% of its total, with a volume of 38.7 million passengers.

There are 89 airlines operating out of Barcelona Airport, 70% of which are low-cost airlines. Barcelona-El Prat is the headquarters of Vueling and LEVEL airlines, and has consolidated itself as one of the main low-cost airports in Europe in recent years.

It is also an important hub for scheduled airlines with direct connections to the United States, Canada, South America, the Middle East, Asia and Africa. Only 9 of the 89 airlines operating at the airport (Vueling, Ryanair, easyJet, Iberia, Norwegian, Lufthansa, Air Europa, Wizz Air and British Airways) account for 75% of the airport's traffic. Charter flights account for 1% of annual traffic, with just over half a million passengers.

Domestically, the airport moves 14 million passengers and accounts for 26.6% of its total traffic. The route of the Madrid-Barcelona corridor -or air shuttle- continues to be the route in Spain with the highest passenger traffic, although from Barcelona it flies to 29 domestic destinations on 54 routes.

View of the runway from terminal T1

The airport has the capacity to handle up to 90 operations per hour. It consists of 2 passenger terminal buildings: terminal T1 and terminal T2.

With the Master Plan approved by the Ministry of Development in 1999, the Barcelona Plan officially began, which will provide the infrastructure with its current buildings and runways.

In the period from 2001 to 2007, several reforms affected T2: the creation of the new Module 0 for regional aviation; the reform of terminal B (new commercial area and improvement of the baggage claim area) and the extension of terminal A. As for the airfield, in September 2004 the third runway, parallel to the main one, was opened and put into service. The intermodal and connection building between terminals A and B was also inaugurated, with which the front facades of the various airport terminals and the future configuration of terminal A have been aligned.

In 2008, the C terminal opened a new extension module and its 2,200 m2 were equipped with new check-in facilities, luggage, etc.

One year later, in 2009, the T1 terminal was put into operation. A large architectural construction that has been located between the two runways. T1 is equipped with 101 boarding gates, 166 check-in desks, 12,000 parking spaces, and has a commercial area of more than 20,000 2.

Renovation of the commercial area of the T1 terminal

At the end of 2012, and coinciding with a change in the management of the airport, Aena launched a tender for the operation of new shops in the commercial area in terminals T1 and T2. The company World Duty Free Group was the successful bidder in this tender.

In 2015, AENA completed the first stage of the commercial renovation of the T1 terminal, with an outstanding area dedicated to luxury products and major cosmetics and fashion brands. Major brands of recognised prestige have been added to the existing offer since then, providing the commercial area with a great experience for airport users in an area of more than 20,000 m2. 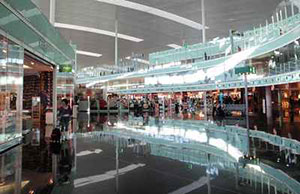 New premises continue to be added to complement the Shopping Center area: The Plaza and the check-in area in terminal T1 at Barcelona Airport offer luxury products and fashion and accessory sectors, such as shoes, lingerie, jewellery and cosmetics, with a quality standard comparable to other European airports.

Josep Tarradellas Barcelona El Prat Airport is classified as a silent airport. This is because it has reduced the amount of public information messages broadcast by loudspeakers. In this way, it contributes to making the stay more pleasant and silent, both for travellers and their companions, and for the airport employees themselves.

The suppression of these messages applies only to boarding and last call messages from the automatic public address system that were heard in the Sky Center commercial area in T1 and in the common area prior to the boarding modules in T2, except for contingency situations. The rest of the messages will continue to be broadcast without any change. Likewise, local public address messages will continue to be broadcast in the area near the boarding gate.

To support this measure, new flight information monitors have been added in the catering areas, which incorporate warnings indicated by the airlines themselves to go to the boarding gate in good time.

Book now and save

How to get to & from the airport by bus: urban, suburban and large distance bus transport.

Find the shortest route from your point of departure, and park your car upon arrival.